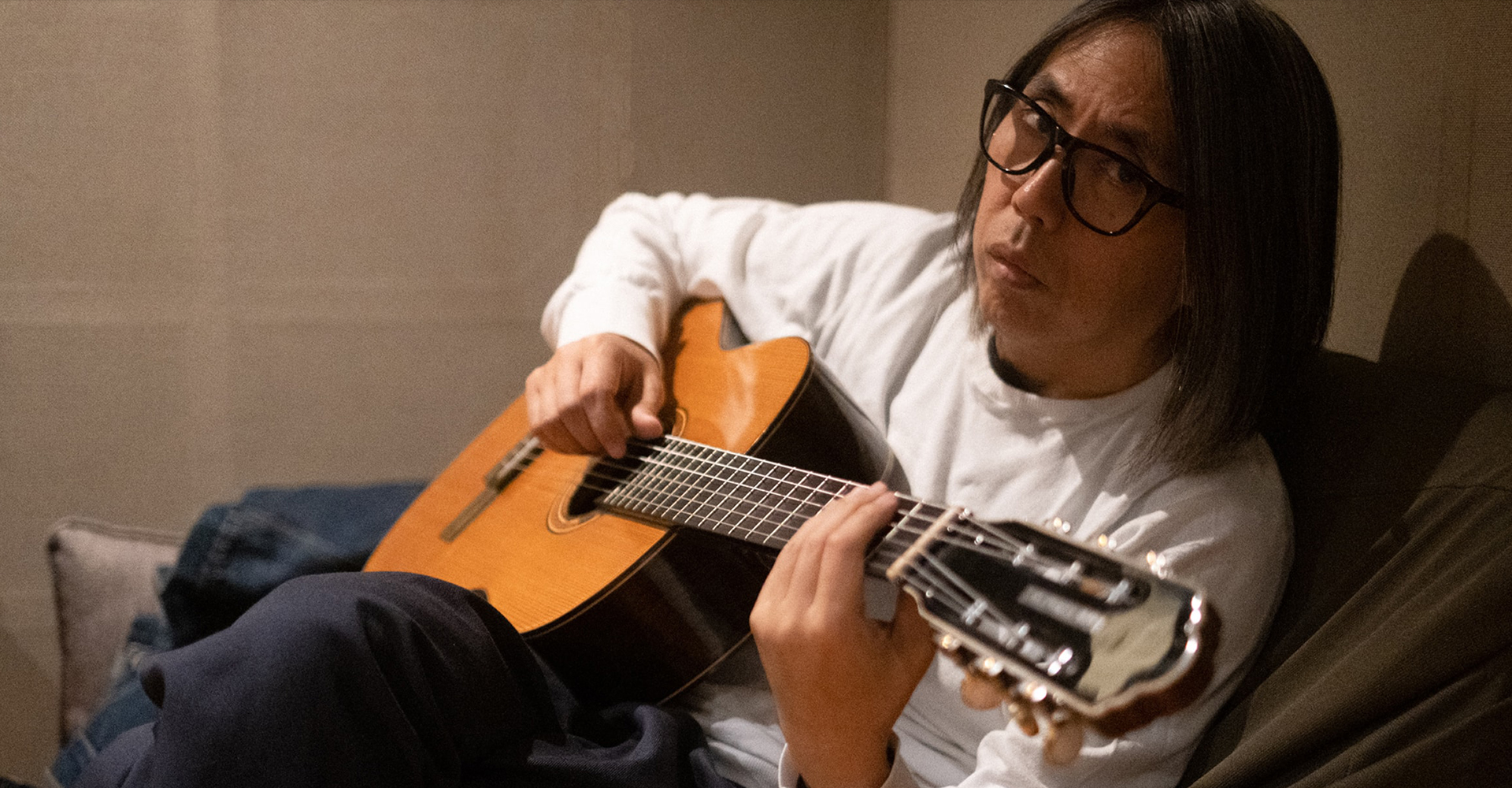 Hiroshi Fujiwara’s new album slumbers 2 is a sequel to the slumbers album released three years ago which again features Shunsuke Watanabe as co-producer. The album combines musical elements such as disco, dub, and house which were all integral to Fujiwara’s career as a musician but reinterpreted through a modern lens. Fujiwara has always been known to adapt his creative output with the times, so we asked him what music means to him in that context. This is part one of our interview with Hiroshi Fujiwara.

Honeyee（H）：Your new album slumbers 2 features Shunsuke Watanabe as co-producer who also worked on the slumbers album from 2017. Can we say this new album is a sequel?

Hiroshi Fujiwara（F）:Yes you could say that. I’ve worked with Shunsuke since my shows with YO-KING and AOEQ [1]. When it comes to recording, I worked with him since my manners [2] album which was released before slumbers.

H:So when it comes to singing material that you wrote, you’ve been working in that style with Shunsuke Watanabe since manners?

F:Yeah that’s right. Before that, I never really worked with a producer to make music, so working with Shunsuke on the production process made things much easier.

H:In the past, you produced your records yourself, but what was it like collaborating with Shunsuke? When we visited your studio, I saw you giving detailed instructions for the arrangements to Shunsuke, which I thought was quite different than how other artists and producers work together.

F:Shunsuke is very flexible and can understand my ideas quickly, so working with him is a smooth process. He also has his own unique approach to playing chords which doesn’t fall under the categories of classical, jazz, or fusion, which I really like. He sometimes adds complex touches to the music which is kind of like his signature sound. So you could say that we wrote some of the songs together. We also play shows together which is important.

H:There is a common thread running through these past few albums, which you worked on with Shunsuke, but on slumbers 2, you incorporated elements such as new wave, disco, piano dub, acid house, and balearic which were all an important part of your history as a DJ. Did you have the intention to create an album with a retrospective aspect that spanned your entire musical career?

F:I was kind of conscious of that. I wanted to create new songs that were inspired by my internal archive of music which is made up of all the music I’ve listened to and played as a DJ. I had that concept from the previous album, slumbers, but I was able to execute that idea more clearly on this new record.

H:You released the album Nothing Much Better To Do [3] during your days as a DJ, when sampling became the norm in production. But you went against the grain and  featured various guest musicians and used live instruments to create a post-sampling sound. Your album Classic Dub Classics [4] was a concept album where you took a dub approach in reinterpreting well known classical pieces by composers such as Bach and Debussy. These past albums were based on specific concepts or techniques, but would you say you’re taking a more natural approach to expressing your emotions on slumbers and slumbers 2?

F:As you say, these recent albums aren’t based on specific concepts, but on slumbers 2, there is a concept or theme for each song, and I wanted to combine all of those elements on one record. Normally on a hiphop album there’s going to be rapping on all of the songs, or a house album is going to be full of house tracks. Sometimes I think it might be better to create a house album or a disco album with all vocal tracks. But I was influenced by people like Malcolm Mclaren who produced albums that featured all types of genres and styles of music and integrated them on a record, which has become normal to me. So in that sense, you could say that my approach to this album was very natural.

H:What was your approach to writing the lyrics? Do these lyrics reflect your inner emotions?

F:That’s hard to say. Sometimes I write lyrics from a third person point of view. Recently I’ve been taking a more collage-like approach to combining words rather than diving deep into the meaning of the lyrics.

H：The song “Territory” on your latest album seems to be more straightforward in terms of sound and your word selection for the lyrics, representing much more of your personality…

F：Actually, I took a DJ-style approach to producing that song which worked out well. I already knew that I wanted to make a disco inspired tune, so I was like “let’s play the bassline like that song.” For the lyrics, I was looking for a word that would pair well with the word “blind”, and remembered the word “horizont”(known as “cyclorama” in English). I remembered hearing the term “shirohori” (another term for “horizont”) or “horizont” used at photo studios. I’m drawn to words that are frequently used in certain places but unknown to the general public. So I often take notes of words or phrases that inspire me so I can use them in my lyrics.

H：Writing lyrics must be a new challenge for you.

F：It’s pretty difficult for me. This might be slightly extreme to say, but the melodies I like to write and Japanese lyrics don’t match well. Japanese can be a hindrance if you’re making Western-style music. There is an emotional awkwardness that comes with Japanese.

Ichiro Yamaguchi from Sakanaction hosts a series of events called NF and held a remote festival on October 14 called “NF ONLINE” which featured a performance by Hiroshi Fujiwara and UA. They performed UA’s debut single “Horizon” which was written by Fujiwara and also covered by him on his album <i class="u-fs--i">manners</i>.  The two met for the first time in 23 years (!) and performed together for the first time. During the show, they talked about the story of recording this song 25 years ago, and how Fujiwara contributed to UA blossoming into one of Japan’s most unique and talented singers.

H：That “difficulty” is probably something you didn’t experience when you were creating tracks as a DJ and producer. I wanted to ask you what was it that motivated you to write, play and sing your own music material?

F：In the past I used to produce records by getting professional musicians in the studio and featuring vocalists, but nowadays, that approach feels burdensome and the music sometimes feels machine-like. When you work with professional musicians the quality of the music is top notch but it can sometimes lack that human feeling. So even though I’m not that great at playing guitar or piano, I wanted to do it all myself. Back when I recorded Nothing Much Better To Do, it was fun to feature unexpected artists or artists that people forgot about. But that’s commonplace now. For me, it’s more interesting to sing and express myself, even if I’m not that great of a singer.

H：So you became a singer-songwriter yourself as a reaction to the prevalence of music that is produced by featuring musicians and vocalists?

F：No, that wasn’t the intention. I honestly feel that the songwriting, lyrics, and vocals by someone like Ichiro Yamaguchi from Sakanaction are incredible, and I want to work hard to be like him. If I hear some J-Pop, it surprises me how different it sounds from Sakanaction’s music. I hate the type of J-Pop where syrupy lyrics are sung through vocoders. But because that type of music exists, it barely allows us to stay on the side of subculture and counterculture, so in a way it’s necessary.

F：I think it is. We’re in a state of information overload. There is too much of everything coming at you all the time, so nobody really takes time to sit down and listen to music. But I want to continue to make music that still means something and has longevity even when it is heard many years later.

[1] AOEQ was a project by YO-KING from Magokoro Brothers and Fujiwara. They released the albums THINK and THINK TWICE in 2011.

[2]manners was Fujiwara’s solo album that was released in 2013 after the AOEQ project. All vocals were sung by Fujiwara himself. All of the songwriting was by Fujiwara and the album also features Fujiwara’s cover of UA’s debut single “Horizon” which he produced.

[3] Fujiwara was known more as a tastemaker who produced and wrote music for other artists, but Nothing Much Better To Do was Fujiwara’s first solo album released in 1994 under his own name.

[4] Classic Dub Classics was an album that featured dub versions of classical pieces by composers such as Bach, Schubert, and Chopin. The only guest on the album was Eric Clapton. The album was released in 2005 from Kenji Takimi’s label CRUE-L Records.