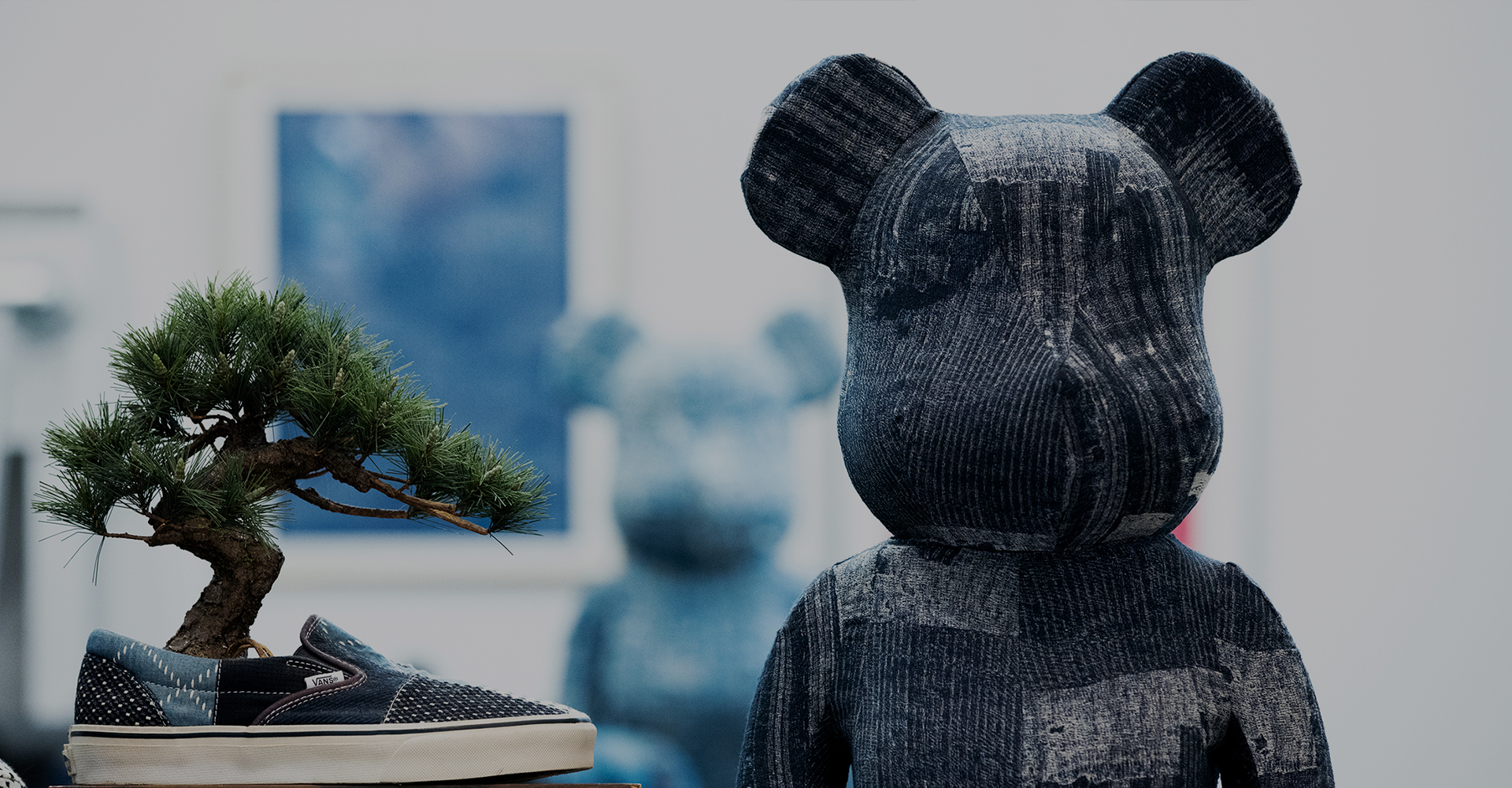 FDMTL, the Japanese brand that reinterpreted Indigo and introduced it to the world
#FASHION#FEATURE

Indigo brand not recognised in Japan

Have you heard of the Japanese brand FDMTL? This denim and indigo-focused brand was established in 2005, and their store is quietly located in a residential area of Ebisu, Tokyo, but their products can be also found in multiple-label stores all over the world.

It's not surprising that even some people in Japan do not know about the brand as approximately 80% of FDMTL's sales are overseas. However, the brand has a proven fact that they're stocked at some of the world's leading boutiques. HONEYEE.COM caught up with FDMTL's designer, Gaku Tsuyoshi, to find out how the brand has grown to become such an established brand.

The FDMTL store in Ebisu, Tokyo, is located in a residential area halfway between Ebisu and Hiroo. When we asked designer Gaku Tsuyoshi why he opened the store in a location that people rarely visit unless there’s particularly something to do in the neighbourhood, he replied: "I think there are only a limited number of customers who like our brand, and I don't really like places with many people like Harajuku. The simplest reason is that I came across this interesting property".

Gaku Tsuyoshi was born in 1976. After graduating from architecture college, he went to a fashion school but dropped out. He decided not to work in the fashion industry, but instead worked for an ordinary company. He then became a freelance web designer and, he was also selling graphic T-shirts that he made to people close to him for fun. Tsuyoshi did not have a strong desire to start his own brand and was just enjoying making things, but a small turning point came around in 2004.

"I had a friend overseas who liked my T-shirts, and through him, a shop called ALIFE in New York wanted to buy the T-shirts I made. It was a pretty famous shop at the time, so I gained confidence and decided to start my own brand in 2005”.

“My attitude was to create what I wanted to create on impulse, without thinking about branding, so I didn't give the brand name any meaning and made the name so long that it would be hard to remember".

The obsession with denim grew in the 1990s

Those who know FDMTL already have the impression that it’s a "denim and indigo brand", but this direction was not developed until about five years after the brand was launched.

"Perhaps it was because I was such a fashion lover spending a lot of time reading magazines and talking about vintage reproduction jeans and denim in the 90s, so I naturally gained knowledge about these things. Then I realised that my denim was getting a better reputation as I ran more exhibitions, so I started using the name FDMTL for my denim items. I decided to unify the brand name to FDMTL in 2015”.

Many of FDMTL's denim and indigo are inspired by Japanese fabrics called 'Boro (rags)', which are made from layered patchwork and repaired fabrics. Tsuyoshi's attraction to such fabrics has its roots in the vintage Levi's® clothing he saw in the 1990s.

"A friend of mine was wearing vintage Levi's® "66" and the faded color was really cool. I couldn't afford them at the time because they were too expensive, but I think that particular memory remained in my head. I was attracted to ‘boro' because you can feel the time and story in the fabric. Then, I started thinking about how I could express this in fashion."

"For example, what would it be like if a man working in a steel mill was wearing denim, or if the denim was worn by a man using a foot pedal sewing machine? I happened to meet a denim maker who was a great match for me, and he was able to create the perfect shape for what I had in mind, so I started to enjoy realising these ideas."

He expressed the feel of worn-out denim, which may exist somewhere in the world but is hard to find in real life, and the patchwork repairs, by adding certain processing. "The FDMTL style is to create something that would not be like this if you were wearing it normally, and to make it look a bit strange".

FDMTL has now gained popularity mainly overseas, beyond Japan. This is also reflected in their sales, as mentioned at the beginning of this article, with approximately 80% of sales accounting for wholesaling to overseas retailers.

“When I started the brand in 2005, I didn't think that Japanese brands could sell abroad. But thanks to brands such as BAPE® and UNDERCOVER paving the way, I started to see the potential around 2011. My first overseas exhibition was in 2012. I exhibited at a joint exhibition in Paris, but people didn't look at me at all. But since I had come all the way to Paris, I packed a suitcase full of samples and went directly to potential retailers in the UK and the Netherlands to sell my products. That didn't make any difference, though (laughs)”.

However, Tsuyoshi strongly felt that Japanese denim was attracting attention from abroad and he actively visited international exhibitions and stores.

"In the first two years, I didn't accomplish anything... I posted on Facebook saying, 'I'm going to Paris for the exhibition’, but then some people said, 'Tsuyoshi-kun, you go overseas every season, but have you got any results? Isn't that a waste of money?’. I felt frustrated. As I'm actually quite competitive, I decided to continue showing my collections abroad for three years, even if it was at my own risk, but then suddenly around 2014, which was the second year, I got an offer from AMERICAN RAG CIE's LA flagship store for buying my products. And even though it's such a fast-moving store, we've actually been working together continuously for seven years now".

FDMTL's great success continued. When Tsuyoshi emailed Sarah Andelman just for trying, creative director of the internationally influential Parisian boutique Colette (which regrettably closed a few years ago), she replied by saying that she was interested in buying FDMTL products, and at the same time, BARNEYS NEW YORK also decided to stock the brand. Lane Crawford in Hong Kong, End Clothing in the UK, and FDMTL products were lined up one after another at international leading boutiques.

"I was surprised that these stockists were all confirmed out of the blue, and it wasn’t like they were buying our products because we were stocked at famous stores. When I asked them about it, they told me that they had seen the exhibitions over the past few years, so I felt that it wasn't a waste of time".

Collaboration that can imagine what it would be like

FDMTL's progress also began in the field of collaboration. The first collaboration was with Vans. The offer came out of the blue as Tsuyoshi explained.

"VANS team said, 'If you collaborate with us, we could make something interesting', then I asked, 'I'd love to try it, but do you know about our brand?'. They replied, 'No, but your brand is really cool', and we decided to work on a collaboration very quickly".

So far, alongside Vans, FDMTL has collaborated with a number of popular brands, including New Balance, New Era, Helinox, master-piece, NANGA and BE@RBRICK, and many of these projects are still ongoing.

We asked Tsuyoshi why collaborations with such prestigious brands have been so successful.

"I think this also reflects in the buying aspect, but because international buyers and directors understand that what I make is indigo, which has a "Japanese sense", and that it is authentic. Also, I think another important factor is that when it comes to collaboration, it's easy to imagine what the outcome will look like".

In fact, each collaboration has come in a striking item with indigo and boro-based fabrics and prints. One of the most unique examples is the Indigo and boro texture printed on BE@RBRICKs and Helinox.

Japanese brands have a strong preference, for better or for worse, so if the selling point is indigo, the brand will not use indigo pattern print. However, Tsuyoshi's creativity and thought from a customer’s perspective have been incorporated into his work.

“I like denim as well as boro, but I'm not willing to make them exactly as they are. You can't create something beyond the original, and I'm not interested in reproducing it exactly. I'm more interested in how I can add new value to it. Moreover, if you actually make something from boro, it's not very practical when using it. That's why I rather use prints in many of my works. When we made the BE@RBRICK, some people said that a matt look would be more like Indigo, but I preferred a glossy finish. I think that sense of incongruity gave a new look to it".

Tsuyoshi says he feels a little suffocating from the recent Japanese fashion scene.

"I feel that men's clothing in Japan has become a bit overly 'cultured'. People who are familiar with geeky stuff can enjoy within that community, but on the other hand, I don't think it's open to everyone. There are a lot of brands that are particular about "blah blah sewing" in denim and clothing, and push that kind of background. FDMTL also has a lot of 'redline selvedge' or 'blah blah seams', but we think it's obvious, so we don't mention it at all. We try to make our products convincing to denim lovers, but we don't speak about it because it would detract from the true appeal of the product. We don't even write about using sustainable fabrics. I'm not criticising the way other brands do things, but I think that kind of thing is what makes FDMTL unique".

He explains why he continues to make products: “I still get excited when a sample comes up”. He says that to continue making things at his own pace, he would like to set up an environment where he can concentrate more on design in the future.

When asked, "What goals do you want to achieve?" he told us, " I want to do something with things that I have loved since I was a child". There are 'Weekly Shōnen Jump, Famicom', Game Boy, Radio-controlled cars, Mini 4WD, G-Shock and other items displayed in FDMTL's atelier.

“I'm sure there are only a handful of people who can live a life with goals like this, so I can bear with things being a bit tough (laughs). The thing I want to achieve the most? Well, that would be a collaboration with NIKE - I'm so obsessed that I have about 50 pairs of Air Jordan1s, so it would be great if I could make something with NIKE one day”.

Born in 1976, he started FUNDAMENTAL AGREEMENT LUXURY, the former brand of FDMTL, in 2005. In 2009, he opened a flagship store, CATII TOKYO, in Meguro. The brand was renamed FDMTL from the A/W 2015-2016 season. Released a number of items with a new interpretation of indigo and boro, gaining popularity especially overseas. The brand has expanded its stockists mainly at famous overseas speciality stores and has collaborated with many others. In 2019, the store has been relocated and opened in Ebisu, Tokyo.

I am ashamed that I only found out about FDMTL last year, which has been around for 17 years, despite having been working in the men's fashion media for many years. Knowing that many of their products are sold outside Japan gave me a little excuse but also made me regret that I had overlooked such an interesting brand. I believe that Tsuyoshi-san's unbiased approach to manufacturing, in which he actually has a strong aesthetic, could be more appreciated not only overseas but also in Japan. (Takei)