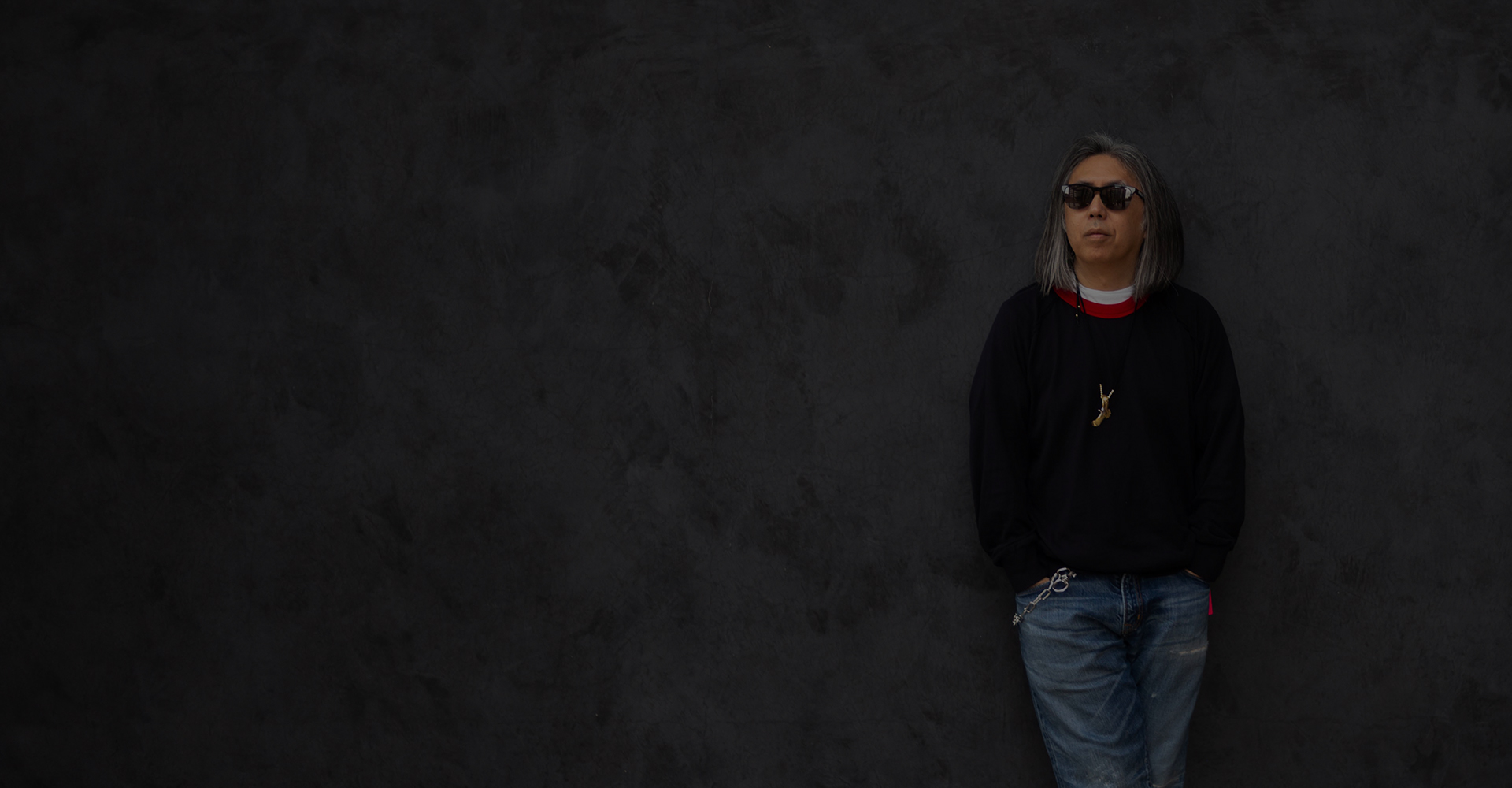 What is all bout 'Authorised Bootleg Community' that uses NFT technology?

Asked Hiroshi Fujiwara about the NFT

Our HF, Hiroshi Fujiwara, has teamed up with music producer team ALLe to launch a new music NFT platform ABCRECORDS, releasing 50 of his own songs on Friday 27 May 2022.

This interview was expected to be a story about Hiroshi Fujiwara, who has not hesitated to enter the NFT market, which is booming in recent years, but when we found out through this interview that he is working on this project while calmly keeping an eye on this NFT frenzy.

HONEYEE.COM caught up with HF to learn more about the NFT and its relationship with music copyright.

The innovation of the NFT and ABCRECORDS

It's already quite revolutionary that musicians themselves distribute music from the NFT platform, but let's start with what's so innovative about this ABCRECORDS project first.

・By submitting a request, the purchased tracks can be released as CDs and sold.

・Reselling purchased tracks on the designated NFT market for a profit, with a portion of the royalties returned to the artist.

To understand the above all, it will be essential to summarise what NFT is all about first of all. If you are already familiar with NFT, you can skip the next few lines.

NFT stands for "Non-Fungible Token". It refers to "digital data with a certificate of authenticity and proof of ownership that cannot be forged", and blockchain technology makes it possible to add "unique asset value" to digital data that is normally easy to copy. It's a new market as it is issued and traded on the blockchain, just like crypto-assets ( cryptocurrency). This is how NFTs today can be briefly summarised.

Putting such complicated things aside, you may be aware of this "NFT Frenzy" that has been going on for the past few years. The internet news is full of information about NFT such as a single JPG image being worth several hundred million yen, and recently, not only the art and gaming industries, but also fashion, professional baseball teams, individuals and even politicians ("Kishida Tokens"!) have started issuing NFTs.

However, opinions on "its value" are divided on an individual level. People may accept, reject or not even be interested in this topic, but in any case, many may feel that they are being forced to make a "tricky decision of the new era".

The third NFT for Hiroshi Fujiwara

The first question we asked in this interview was, "When did you first realise what NFT was?” but he responded with a surprising answer.

“I don't understand anything yet either, I was astonished to learn that there are multiple blockchains two days ago. I thought there would be just one blockchain”.

Yet Hiroshi Fujiwara has already released two NFT projects so far. The first was the FRGMTRZM NFT that had been released in September 2021, which he worked on with Daito Manabe from Rhizomatiks and stylist Shinichi Mita. And then NON FRAGMENT TOKEN, just released this January 2022 with legendary skater Mark Gonzalez. FRGMTRZM NFT's 'TEST#1' was issued in 25 editions, while NON FRAGMENT TOKEN was released in 10,000 pieces, which sold out immediately.

“It’s more like I'm just along for the ride as I'm not involved in the technology part of it. Initially, my friend Manabe-kun asked me to do something with NFT together, so I just did it. I don't think we even called it NFT back then. But I'm not the type of person who wouldn't give it a go even if it doesn't feel fully right".

When asked what Hiroshi Fujiwara thinks of the current situation surrounding the NFT, he responded with the exhilarating HF's theory.

'The only NFT I bought and own myself is the sneaker’s STEPN. I haven't bought anything else myself. NFTs are so nasty, and a lot of people who have their wallets full of NFT (when something is released) make it sound like an honour to be gifted them. Like, 'I don't have to buy (NFTs), I get them all for free.' That kind of thing is also obnoxious. So, NFTs are pretty lame and ugly at the moment (laughs)".

HF continues his scathing view on the NFT as follows.

“It's like saunas and Ferraris. There's nothing wrong with saunas, Ferraris or NFT, but it's lame to 'talk' about them. I think NFT is one of those things. What I think is that if you don't want NFT, don't buy it. I mean, isn't it expensive? (Laughs). I think only people who really think it's good should buy it".

Recently, leading figure Brian Eno commented that "NFTs seem to me just a way for artists to get a little piece of the action from global capitalism", and it’s very HF that the person who actually releases NFT would make such a statement.

As mentioned at the beginning, we also asked about how he came up with the name ABCRECORDS which has a very unique Hiroshi Fujiwara's twist to it.

"It came up in my mind that I wanted something as simple as possible when naming it, or something that doesn't make much sense. ‘Authorised Bootleg Community’ is just an add on. Is it too showing off? It could have been ABC for ‘Asobi (fun) and Baka(idiot) Community' (laughs)".

However, the name of this NFT project "lives up to its name”. The interview took place on the of the ABCRECORDS launch, but anyone who could bid on the NFT tracks within 24 hours and win the bid would be given the right to use the tracks almost without any restrictions.

It allows purchased tracks to be remixed, sampled, distributed and even released and sold as CDs upon request. The artists themselves are encouraged to "Bootleg" the music.

This system is similar to that of the Grateful Dead, a band that led American hippie culture mainly in the 1960s and 1970s. The Grateful Dead fought against the music copyright system and quickly gave up the copyrights to most of their songs. They allowed the fans, known as "Deadheads", to sell live recordings without asking for a copyright fee or master recording fee, and even allowed selling tie-dye logo T-shirts and "Dead Bears", which were made by their fans. The band gave a priority to "getting fans to come to the gigs" with the proceeds from those sales.

HF said that he had never heard of that Grateful Dead approach, but shared his own experience that he had already practised copyright waivers during his indie days.

“When I was releasing my music independently from Crue-L Records, I didn't use JASRAC for my music. People say, 'If you don’t register your music on JASRAC, you won't get any profit from your music being used on radio or TV.’, but first and foremost, my music doesn't sell a million records, nor does it get a lot of airplay on the radio or anything. If someone wanted to use my music, I was thinking that they would ask me, and also it would be troublesome not to be able to use my music on my own".

Although he has gone through JASRAC since he started releasing music on major record labels and Sakanaction's current NF label, there is no doubt that the launch of ABCRECORDS reflects Hiroshi Fujiwara's punk and anarchic thinking on music copyright.

When asked if this was a reflection of his experience as a DJ and such, he denied it and gave an answer that was clearly unique to HF and distinctly different from other musicians.

‘It comes more from the part that I was doing clothing and fashion. I thought it would be nice to sell music in the same way as selling things, like selling T-shirts. For example, if you sell something for 1,000 yen, the wholesale price is 700 yen and the retailer makes 300 yen, so it's a very simple world to understand".

The fake and the real in the future, a world that the NFT may change

ABCRECORDS has released a total of 50 songs based on five new instrumental songs by Hiroshi Fujiwara, each of which was arranged by himself in ten different patterns, ensuring of course that each song is "unique", which is an essential element of NFT.

At the beginning of this interview, Hiroshi Fujiwara said that "people who don't need it don't have to buy it", but we asked him about the kind of people he wants this music NFT to be for.

“I think it would be great if people use it as background music, for example on Instagram, or use it as their own theme song, and I think it could be a platform for different trackmakers to showcase their work”.

While ABCRECORDS is open to other musicians and track makers joining in the future, not just Hiroshi Fujiwara, nothing has been confirmed yet as of the time of this interview.

While conducting the interview, it feels that NFTs raise a very simple question. With the increasing use of subscription services, the sense of "ownership" has changed, and it can be interpreted as people's desire to own the "only NFT" growing.

When asked such a simple question to Hiroshi Fujiwara, he simply explained his perspective on the value of things and NFT, although he said that he understood very little about NFT.

“I don't really understand NFT either, but isn't that what everyone is talking about Web 3.0? For example, up until now, you might have rented a HERMÈS bag from a rental shop, posted it on Instagram as if you owned it, and then returned it when you were done, or bought it and sold it on a marketplace platform as soon as you show off your purchases. But in the future, when it all goes to blockchain and it's tagged, you won't be able to do that. Maybe it will become visible in that way, and some people might even prefer to choose the fake ones. It's interesting."

Lastly, I asked Hiroshi Fujiwara a question that I had been wondering about for a long time: 'Why are you able to try new things one after another, including this music NFT and numerous collaborations?'.

He answered: "I think it's because people only pay attention to what I'm doing. There are a lot of things I won't get involved in. I don't even play golf at all (laughs)".

Started his career as a club DJ in the 1980s and formed TINY PUNX with Kan Takagi in 1985, dynamically active in the early days of hip-hop in Japan. Since the 1990s, he has expanded his work as a music producer, composer and arranger, and since 2011 has worked on AOEQ with Yoichi Kuramochi from Magokoro Brothers, INO Hidefumi, OKAMOTO'S, Yuna & Yuki (CHAI), Shunsuke Watanabe (Schroederheadz), Jungo Miura ( Petrols), Bancho (Wonderful Boys) and other musicians in a new band style continuously. With Ichiro Yamaguchi from Sakanaction, they also do music programmes and distribution irregularly, and their music is currently released from the NF label. He is also a driving force in worldwide street culture and has a huge influence in the field of fashion.

Hiroshi Fujiwara started HONEYEE.COM about 15 years ago as one of the founders, creating global recognition and influence in the early days of online media. Many people recognise his foresight and achievements beyond this media, but this interview provided a valuable opportunity to find out what Hiroshi-san thinks about music and NFT. There are still many things about NFT that I personally still don't understand. I hope I was able to be of some help to him through this interview.（Takei）